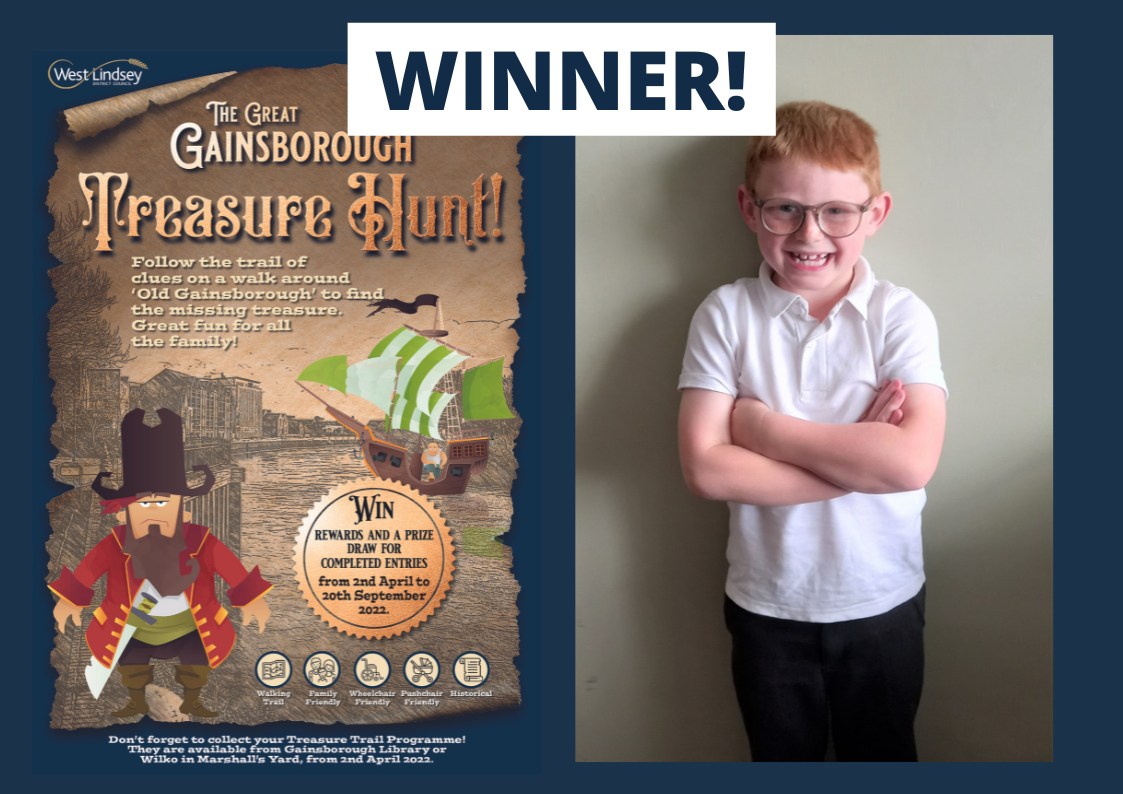 Congratulations to seven-year-old Braydon Wickson who is the first winner of our newly created treasure hunt aimed at engaging people in the history of Gainsborough.

So far more than 2000 free booklets have been collected for people to take part in our exciting treasure hunt since it was launched in April.

The Great Gainsborough Treasure Hunt is based on a legend that a casket of gold coins intended for Bonnie Prince Charlie’s Jacobite Rebellion was discovered on a ship at the port of Gainsborough in 1745. It was confiscated then never heard of again.

The challenge is to follow clues along the route from Marshall’s Yard down to the riverside path, writing down the answers which are then decoded to find the whereabouts of the treasure.

Braydon took part in the treasure hunt during the Easter Holidays with his mum Charlotte, their nextdoor neighbour and her two children.

Charlotte said: “All the children absolutely loved looking for the clues and the adults enjoyed it and learned a lot of things they didn’t know about Gainsborough’s past.”

Braydon goes to Hillcrest Academy and enjoys playing out on his scooter or playing indoors on his Xbox. He’s excited to spend the £30 High Street prize in one of the many shops available.

Don’t worry if you missed out on the monthly prize this time, there is still many opportunities to win for all those who manage to locate the hidden treasure they will be able to claim a small instant child-friendly prize. On top of this participants will be entered into a monthly draw for a £30 High Street voucher.

“The treasure hunt has been phenomenally successful with over 2000 free booklets collected during the first month.

“The hunt takes you on a walk from the starting point in Marshall’s Yard to the riverside path, finding clues and solving puzzles along the way to find the location of the treasure.”

At the final location every child can claim an instant reward and enter the prize draw which will be drawn once every month until the hunt ends on 20 September.

Free booklets are still available at Wilko in Marshall’s Yard and at Gainsborough Library.

Behind the Business: Meet Rebecca from Sinful Skin Aesthetics
Changes to voting at polling stations in West Lindsey from May 2023
Solar panels helping to reduce carbon footprint
END_OF_DOCUMENT_TOKEN_TO_BE_REPLACED