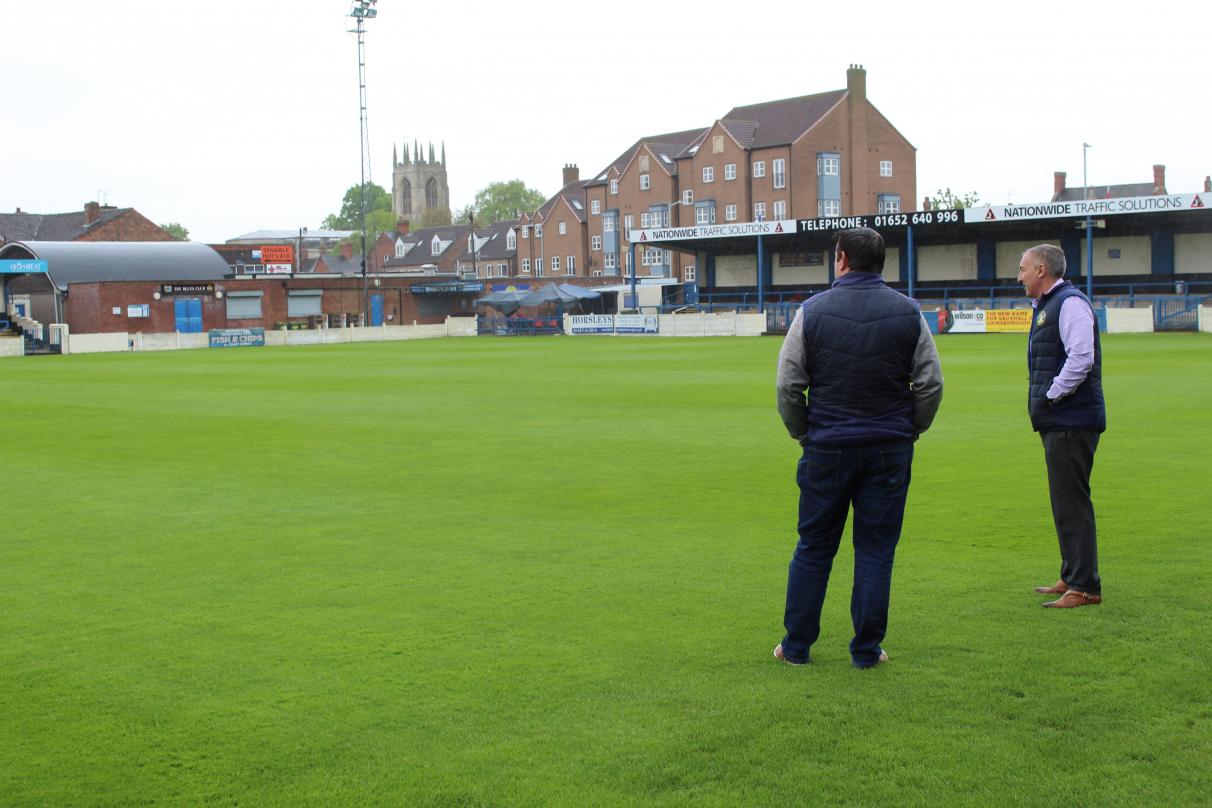 The Chairman of Gainsborough Trinity has called on residents to get back behind their local football team when the new season starts this summer.

Plans are being put in place to welcome football back to the Northolme – the home of Gainsborough Trinity - for the first time since late last year, with pre-season already underway.

Chairman Richard Kane – speaking pitch-side alongside Club Secretary and local Cllr Matt Boles, outlined that everything was in place and ready for a full return.

He said: “We’ve started signing players, the pitch is ready to go so we’ve got everything in place – all we need is people to come along now and support the club.”

Local fans will be needed, according to Richard, to guarantee that the club is still there in 12-months’ time, with financial difficulties in particular affecting the club massively.

Richard said: “We’re looking forward to opening the gates and seeing if we can get that community spirit going again really. When we were last playing properly, we were on a bit of a high. Now we need to try and get people back in through the gates again – that’s the main thing.

“Rather than spend money on Sky Sports, spend some money at your local football club and support them on a Saturday afternoon. Try and keep it in town because in 12-months’ time, if all this continues, we might not be here and that’s the difference.”

The importance of the football club to the town is clear, according to Cllr and lifetime supporter Matt Boles, who outlined just how much the social and economic value of the club was needed.

“It’s also massively important to the town as a whole in terms of the economy. On a match day, the revenue it brings to the town, pubs before the game, the shops – that’s just our fans – and that’s before you bring in the opposition who come in by train and buses. We attract not just home fans – fans can come in from Retford, Lincoln, Scunthorpe, Market Rasen - that all contributes to the economy of Gainsborough. We are one of the most high-profile things in Gainsborough I would say – so the media coverage we bring in puts Gainsborough on the map.”

“We just need fans through the gates once again to be able to survive and get back up to where we want to be as a football club.”

Both the Chairman Richard Kane and Cllr Matt Boles agreed that it was the social element of the game that they missed the most, and the part they were looking forward to getting back as quickly as possible.

Cllr Boles said: “Like a lot of people, I’ve fallen into a bit of a lull – getting out of the routine of being involved in the day-to-day, such as the match day routine. We have to do our bit as a club to jolly people up and get them back into that routine again because we know once people fall out of a routine it’s hard to get back into it and back out on a Saturday.

“Like Richard said, it’s not just about the football. One of the biggest parts for me is having a pint with your mates, watching the football and the pint afterwards. It will be good to get everybody back together and have a pint and a laugh – and have the banter that flows with it that everybody enjoys.”

All planned events and re-openings this summer are subject to Government national and local guidelines being in place at the time.