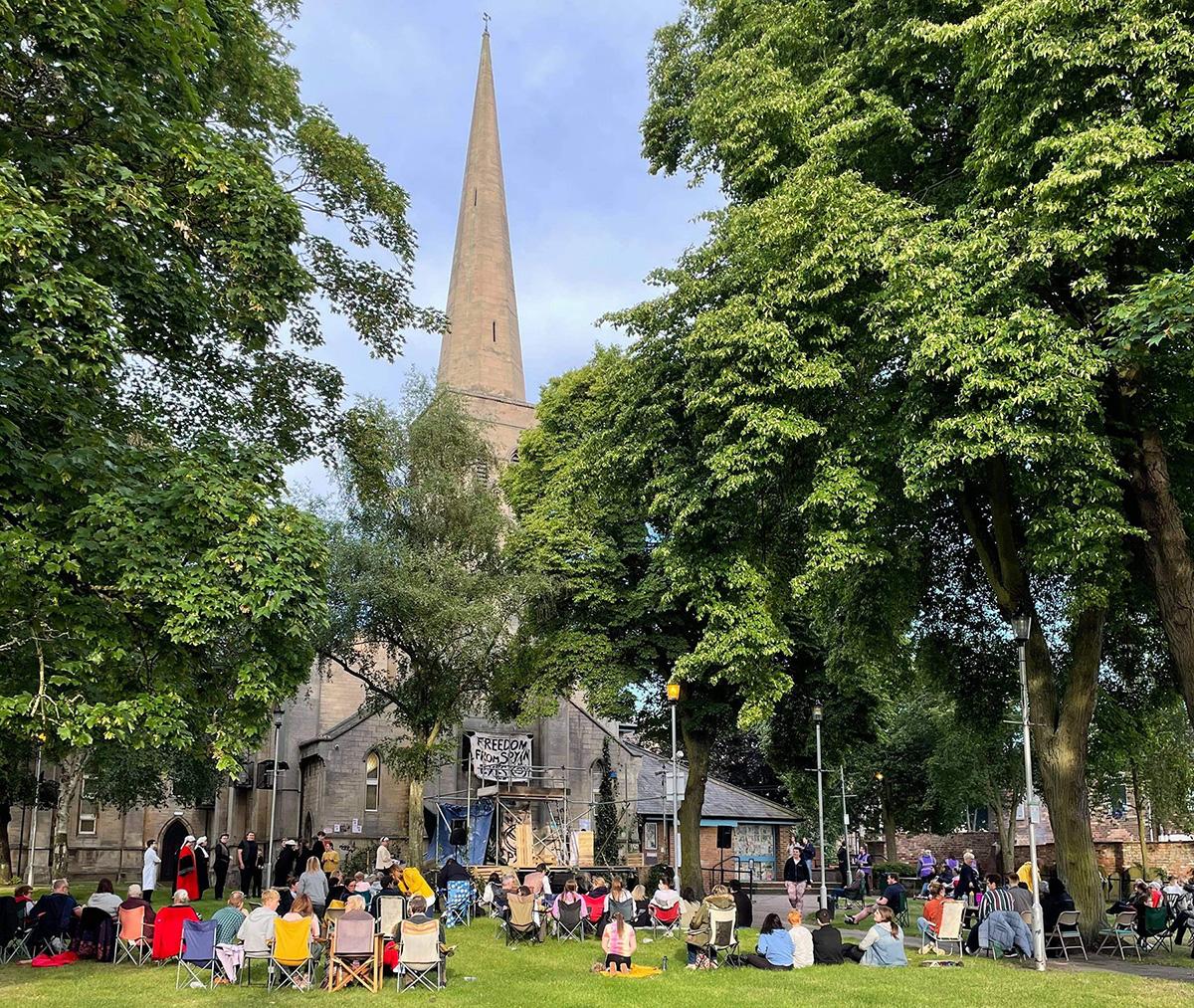 Families gathered on the lawn outside of the Trinity Arts Centre in Gainsborough for the first live show since the COVID-19 lockdown.

It was all smiles for 150 theatre goers, who showed their support for live theatre last night, at Trinity Arts Centre’s premier outdoor show. Audiences unravelled their picnic blankets and unfolded their chairs as they settled in to watch two shows in one night.

Craig Sanders, Trinity Arts Centre Manager was delighted to see audiences back after being closed for such a long time.

He said: “It was such a lovely sight to see audiences again and for us to be able to showcase some of the changes we have made to our building and share our fantastic new brochure packed with shows. It was a successful first event and I was quite pleased more than 150 people attended and said how well organised and friendly the staff were.

“A lot of theatres nationally have reopened with professional shows but I am incredibly proud that our first show was a created and performed by local young people. They have been working with Shooting Fish and professional writers for months and rehearsing in our space and I think they did an amazing job.”

Shooting Fish Theatre Company have been working with young people from Gainsborough on the productions as part of the Gainsborough Literacy Project, which aims to support young peoples’ skills development.

Young people presented a short play called, A Slip of the Tongue in co-collaboration with The Old Nick Theatre and Museum. This was followed by a performance of No Picnic. Shooting Fish worked with Community Learning in Partnership (CLIP) over the last 6 months, developing a new script, supported by professional writer, Rob Johnston.

Nine year old Thomas Meakin was beaming with pride after travelling all the way from Barnsley to watch his friend Harry Green (9) perform in the show.

He said: “My mum drove me all the way here so that we could watch my friend perform in the show and I have been so excited to see him.”

Meeting up after the performance Harry said he was pleased his friend had come to see him. He added: “Performing in the show was really good. I would like to come back here and maybe perform inside the arts centre.”

Harry’s proud parents and grandparents also watched the performance. His Mum Dany Green (38) from Blyton said: “I am really chuffed that he is in the show. We moved over here just before lockdown and he has not had much of an opportunity to go out and meet new people. It is great that he has been able to get into theatre, meet new people - he has loved it.”

Anita Kirkwood and Lisa Stevens who both work at Community Learning in Partnership (CLIP) attended the event.

Anita said:  “The Students at CLIP have been involved in the production and we are quite excited to see what they have created.”

Lisa added: “I think the Trinity Arts Centre is brilliant, my daughter has done a lot of performances here and I think the theatre is amazing. It is great to be able to watch live shows again.”

Star Thompson watched the show with Paris Thompson (7) and Michael Newbury. She said: “We found out about the event from the college and I have been really looking forward to watching the live show. I usually come to Trinity with the college.”

It was certainly a family occasion for Sarah and Lee Rhodes who brought both sets of grandparents to watch their daughter perform in the show.

Sarah (43) of Kirton-in Lindsey said: “It is the first time we have been to the Trinity Arts Centre and we are so excited. It is our daughter’s first performance and it is so good to be out to watch it.”

Writer Rob Johnston said he was proud to be able to watch the performances outside in the sun with his partner Mairi Byrne. He said: “It is really great to be at the Trinity Arts Centre, to see people turning up and sitting down to watch a show, this is the way theatres should be. I have worked with the young people for a few months – some of it was online but we did some workshops in person and it has been great.”

Copies of the Trinity Arts Centre new brochure was handed out to audiences which shows an exciting line up including ITV’s Benidorm star, comedian, Crissy Rock, live music, comedy and panto is returning this Christmas!