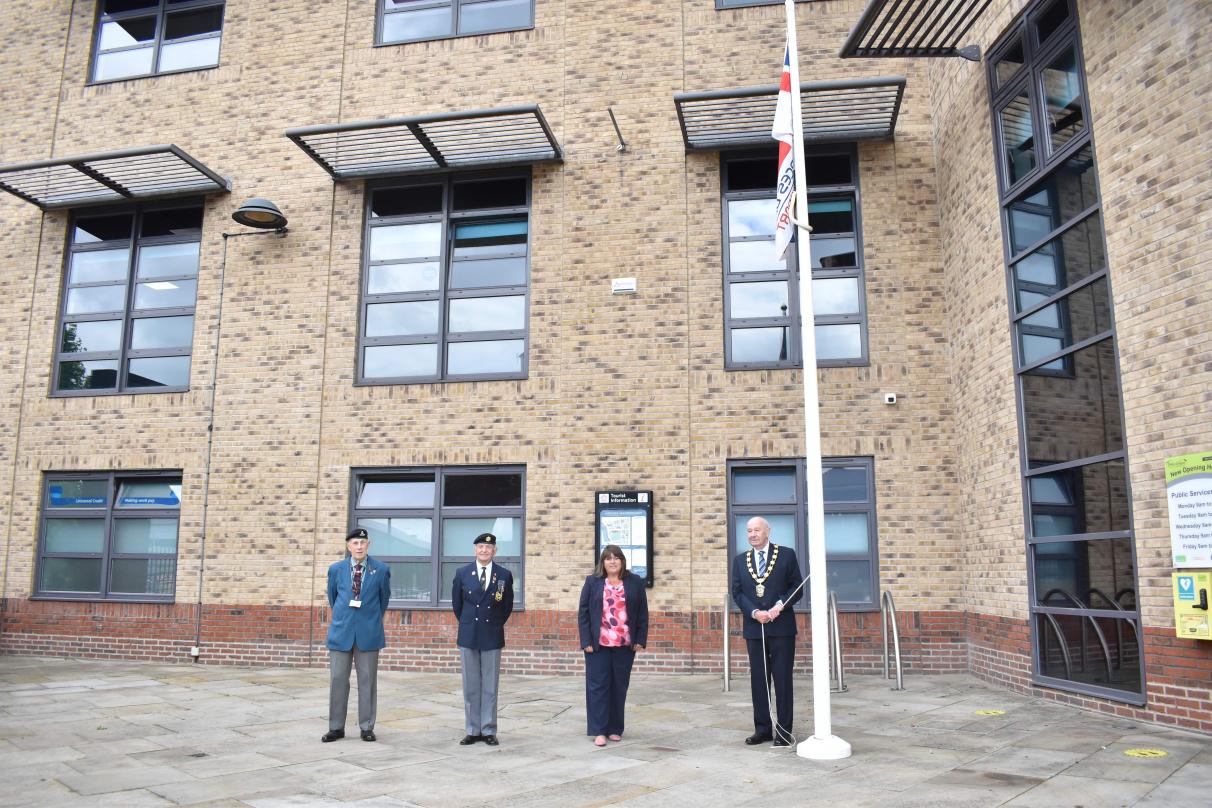 Armed Forces Day is an annual opportunity for the public to show their appreciation and support for the men and women who serve in our Armed Forces, including the Royal Navy, Army, Royal Air Force, reservists, veterans and cadets.

Chairman of the Council, Cllr Steve England, said: “Armed Forces Day in the UK is an annual event to commemorate the service of men and women in the British Armed Forces.

“Normally we would hold a ceremony at the Guildhall in Gainsborough with dignitaries and members of the public, but due to Coronavirus, we are unfortunately having to do things differently for a second year.

“I have however, already raised the flag in a small ceremony at the Guildhall and it will remain in place for a week to mark this special occasion.”

Councillor Robert Waller, member champion for Armed Forces, said: “In normal times, we would take this opportunity to come together and salute our Armed Forces as one community. Sadly, we have to do things slightly differently this year – but that doesn’t mean we can’t show our true appreciation to all those associated with the Armed Forces.

“I am delighted that the Armed Forces flag is currently flying at the Guildhall, and I hope that in some way demonstrates our support and respect to all those associated with the Armed Forces – from those currently serving, to those who have given their lives in previous conflicts, to veterans, cadets and family members. I salute you all.”

Chief Executive of West Lindsey District Council, Ian Knowles, said: “Armed Forces Day is an opportunity to do two things: firstly, to raise public awareness of the contribution made to our country by those who serve and who have served in her majesty’s Armed Forces, and secondly, it gives the nation an opportunity to show its support for the men and women who make up the Armed Forces community – from those currently serving, their families, and from veterans to cadets.

Chair of the Royal British Legion, Gainsborough, Frank Charlton, present at the flag-raising ceremony, said: “Armed Forces Day is a time to both commemorate those who have given their lives in acts of conflict, and celebrate those who are currently serving as active members of the Armed Forces.

“It is the hope that we will all be able to come together properly to pay our respects in years to come – in future years, we want to see the town flooded with reenactors, period vehicles and the entire of Gainsborough standing still to honour the occasion.

“I am delighted that the Armed Forces flag has flown high this week over West Lindsey as we mark the occasion in a safe but respectful manner. Armed Forces Day is a Town Council event, supported by the Gainsborough Armed Forces Veterans Breakfast Club and the Royal British Legion.”