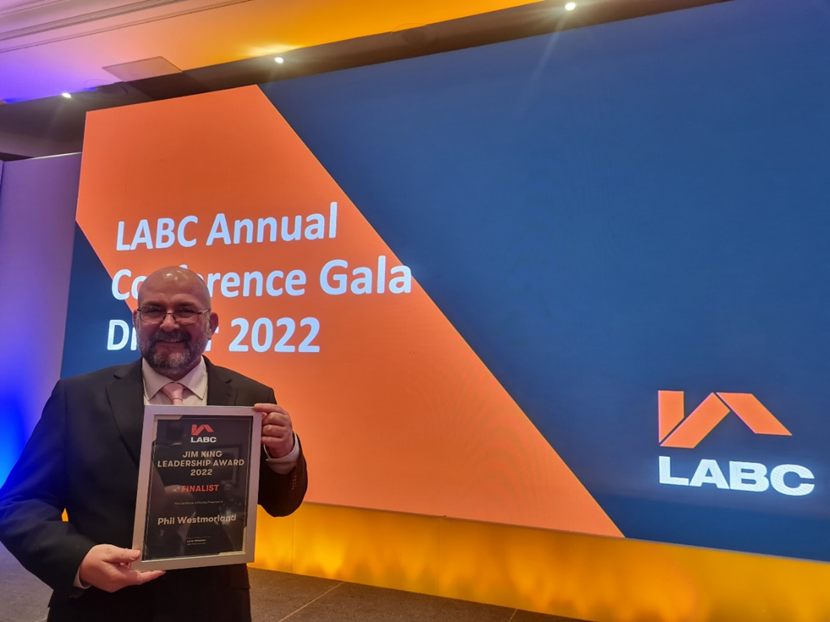 West Lindsey District Council’s Building Control Manager has been presented with a certificate in recognition of his leadership skills.

Phil Westmorland was nominated for the award by his team at the Council for the Local Authority Building Control (LABC) Leadership Award 2022.

This accolade is given to exceptional leaders across the country and was presented at the LABC Annual Conference Gala Dinner held at the Belfry Hotel in Birmingham. The award itself was dedicated to Jim King: a dedicated servant to public service building control who sadly passed away in 2021.

Following an extensive judging process Phil was selected as a finalist, having fully encompassed all the criteria needed to receive this, which included:

Paul Round, one of our building control surveyors, who has undergone lots of training and development during his time with us, commended Phil’s leadership:

“Phil creates a work environment which is very open and honest. I feel there is never a daft question. If I didn’t need to know the answer, then I wouldn’t be asking it. He always makes time whether its Face to face, via Microsoft Teams or over the phone to discuss what I am working on and the questions it has generated. I have learnt a massive amount since working for Phil at West Lindsey District Council. His leadership and approach to our team has allowed me to get to where I am today.”

Phil’s ability to inspire and educate the developing members of his team was the biggest factor for his nomination, but his ability to navigate the ever changing Building Control industry is what made Lizzie Robinson, Change Support Officer, agree he deserved a nomination:

“Phil was my first ever boss in Local Government, when I was a fresh faced 18-year-old temp helping out with some administrative support. He inspires me every day to do my best, and has guided the team through a very uncertain period, whilst still maintaining very high standards of work.”

Upon receiving the award, Phil said: “Having a brilliant team makes it all the easier. It is really heart-warming, and just a little surprising to be thought of so highly.”

The Local Authority Building Control team at West Lindsey has received lots of recognition lately, with their market share skyrocketing to above the national average due to their reputation for delivering a consistently good service to our residents.

If you would like further information regarding Building Regulations, contact the West Lindsey building control team building.control@west-lindsey.gov.uk or call them on 01427 676672.

Behind the Business: Meet Rebecca from Sinful Skin Aesthetics
Changes to voting at polling stations in West Lindsey from May 2023
Solar panels helping to reduce carbon footprint
END_OF_DOCUMENT_TOKEN_TO_BE_REPLACED