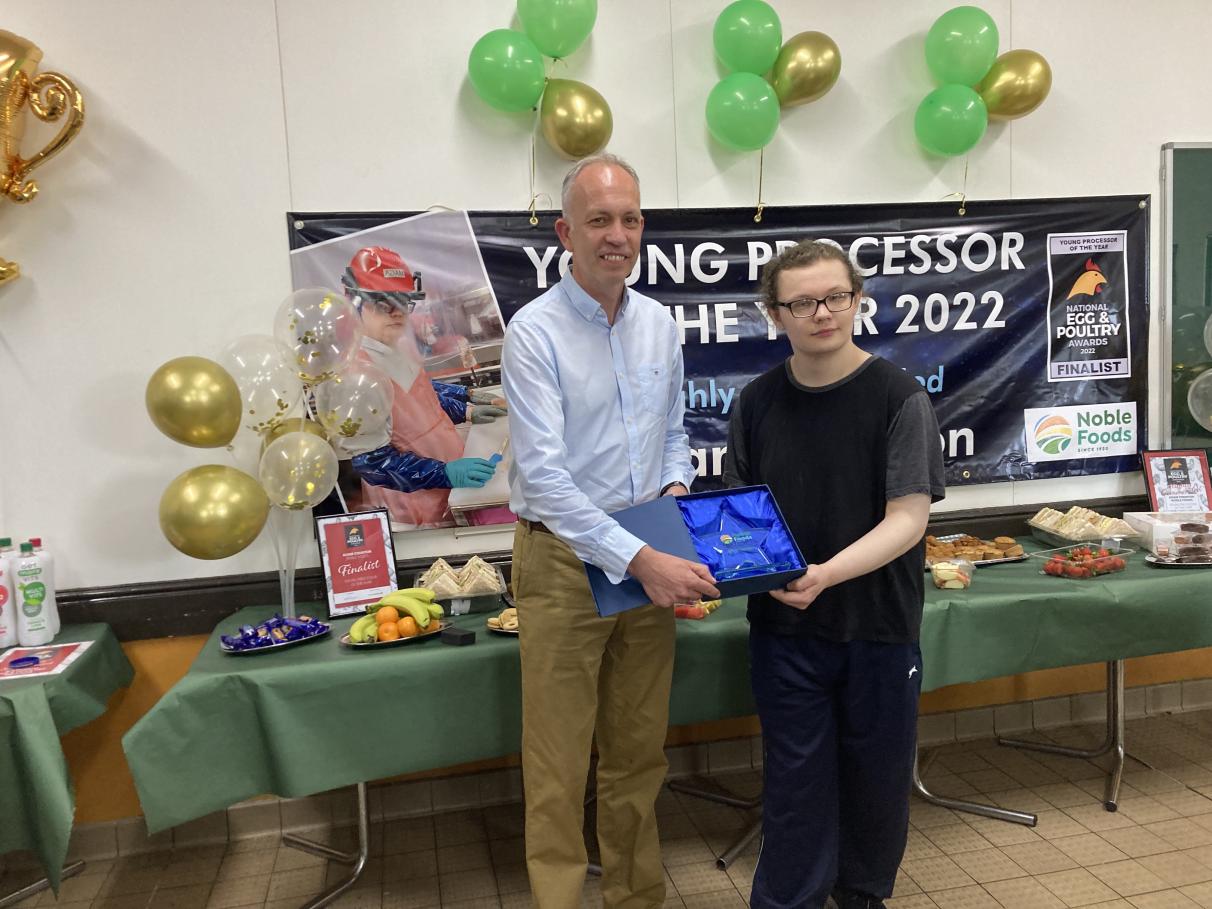 A 19-year-old man from Gainsborough has been highly commended in the National Egg and Poultry Awards – thanks to the support from his employer, Noble Foods.

Adam Stainton who attended Aegir Specialist Academy, was nominated for the award by Noble Foods, at the National Egg and Poultry Awards, in the young processor of the year category.

He was presented with his award by Noble Foods CEO, Duncan Everett at a special event held at the factory. Also attending were representatives from Aegir School, Lincolnshire County Council, West Lindsey District Council and the Greater Lincolnshire LEP along with colleagues and family.

Noble Foods, Gainsborough faced significant recruitment challenges in March 2021 with changes to the local labour market and needed to take a fresh approach to attracting new members of staff to the company. Previously staff had joined on a temporary basis from recruitment agencies (which often led to permanent positions), but the process became more challenging.

HR Business Partner, Kirsty Black took the lead on recruitment and wanted to consider widening opportunities to others in the local community. Working together with organisations such as the Council and the Local Enterprise Partnership, Kirsty contacted the Aegir school to enquire if the company could provide employment for any of their students leaving the school. The call came at the right time for Adam, who was a recent graduate of Lincolnshire County Councils SEND Employment Support programme.

Adam is a young man with autism and struggles with very low confidence both socially and academically. Despite these challenges, he’s highly motivated with a desire to work, to help support his mum with the family finances and to have his own independence. Kirsty explained:

“Adam had an initial look around the processing plant on Corringham Road and took some time to think about which department he would like to work in.

"Adam surprised school staff as initially, it was thought the packing department may have been a better fit for him but Adam was most interested in the Butchery department despite it being a busier environment.”

In order to help Adam adapt to the workplace, a number of aspects were given consideration:

Adam required more input than any usual new starter and to begin with, he had a one on one job trainer to work alongside him during his induction to the company.

Adam has now progressed in the post and has developed new skills in terms of cutting meat. He’s now become a highly efficient member of staff.

“I wasn’t sure how Adam would get on when he first started with us but he is now learning to work in different areas of the department. He is doing a great job and we’re proud to see him developing.”

“We are all so proud of Adam achieving this award and proud of all of our team here, who have truly cared and supported Adam, enabling him to learn, progress and develop his skills and become such a valued member of our team”.

Adam’s Mum, Suzanne has seen a real difference in Adam since he started work and cannot speak highly enough of the support Adam has been given. She said:

“I was dreading Adam leaving school but Noble have been amazing. He is always coming home from work and saying how much he enjoys it and how he has been supported.”

Scott Eley is the SEND Employment Lead with Lincolnshire County Council and has steered the Employment Support Programme. He is proud of what Adam has achieved.

“Adam was one of the first students’ we worked with on the SEND Employment Project. Eileen Allison, at the Pass It On social enterprise in Gainsborough laid the foundations for Adam with his initial work experience, supported by his job coach Carys McCormick. To see him now at work and building greater independence is testament to his own determination to succeed. It really has been a case of best practice in terms of what Kirsty has done at Noble Foods to integrate him into the workforce. The extra care has really paid dividends.”

Alex Nightingale is an Enterprise Co-ordinator for the Greater Lincolnshire LEP and helps to link schools with employers. He said:

“This example highlights how impactful it can be for employers and schools to support each other. Noble Foods and Aegir Specialist Academy have collaborated on several projects this year to help provide opportunities for the students to understand the world of work. Adam’s success is just fantastic, and a testament to the relationship between Noble Foods and the team at Aegir. Well done everyone!”

“To be highly commended in the work place is a fantastic achievement but to be highly commended on a national scale is down to perseverance and hard work, well done. I am especially thrilled to see the way Noble Foods have supported you every step of your journey into employment as it can be daunting for any new school graduate. It is initiatives like this that I would love to see replicated across the whole of the district and more nationally. Well done to everyone at Noble Foods for this fantastic example of work place inclusion.”