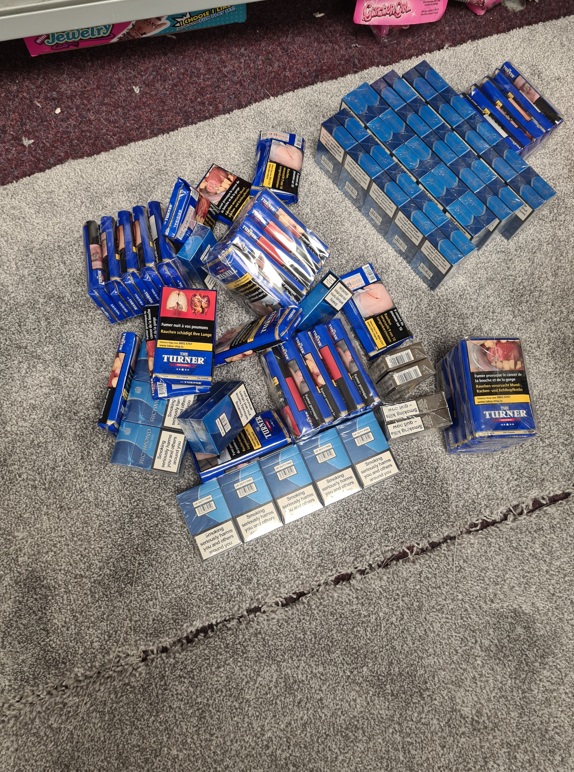 Two stores identified as selling illegal cigarettes in Gainsborough have been raided and seizures made at both premises.

Kim Enderby, Senior Licensing and Community Safety Officer for West Lindsey District Council said the raids were carried out on Tuesday 26 April 2022 and that:

“Two shops were targeted that had previously sold illicit cigarettes during a test purchase operation. Searches of the premises identified that attempts had been made to conceal illegal cigarettes beneath the counter in one shop and in food boxes in the other. The visits resulted in the seizure of thousands of illegal cigarettes.”

Chairman of the Prosperous Communities Committee, Councillor Owen Bierley said the Council will always support businesses but that the Council’s aim to make the district a safe and vibrant place to live, work and socialise. He said:

“One of the ways to support legitimate businesses is by targeting those involved in criminal activity. This is about levelling the playing field for legitimate local businesses who cannot compete with their criminal competitors.

“Shops selling dangerous and illegal products contribute nothing to the local community or economy and this sort of activity will be met head on. Having the three partner agencies working together on an operation like this gives us the opportunity to identify numerous potential offences, share intelligence and cause as much disruption as possible to the criminals involved in this activity.”

“My officers will now investigate to establish the person, or persons, responsible. Our objective is to remove dangerous tobacco products from the market. Illegal cigarettes do not have an important safety feature, they do not self-extinguish. It is a legal requirement that cigarettes self-extinguish if left unattended.

“In Lincolnshire there have been a number of house fires that the Fire Service attribute to unattended illegal cigarettes. In some unfortunate cases these have proved fatal.

“In many areas of Lincolnshire, we see a distinct relationship between retail of illegal cigarettes, antisocial behaviour, drugs, modern day slavery, and violent crime. The sale of illegal cigarettes is unacceptable to law abiding members of the community, but few realise the connection to more serious crime.

“The premises we inspected on Tuesday were used for the purpose of supplying illegal cigarettes and tobacco. Food items present were both sparse and out of date. Clearly the profitability of the business could not be based on the sale of these items. The presence of small quantities of food was just a façade to hide the true purpose of the shop which was to sell illegal cigarettes and tobacco. If you have any information you feel may assist, we ask that you contact us.”

Help us stub out illicit tobacco in Lincolnshire

If you know anything about illegal tobacco products being sold in our area, let us know: you can call Crimestoppers anonymously on 0800 555 111 or report online at Crimestoppers UK.

Behind the Business: Meet Rebecca from Sinful Skin Aesthetics
Changes to voting at polling stations in West Lindsey from May 2023
Solar panels helping to reduce carbon footprint
END_OF_DOCUMENT_TOKEN_TO_BE_REPLACED