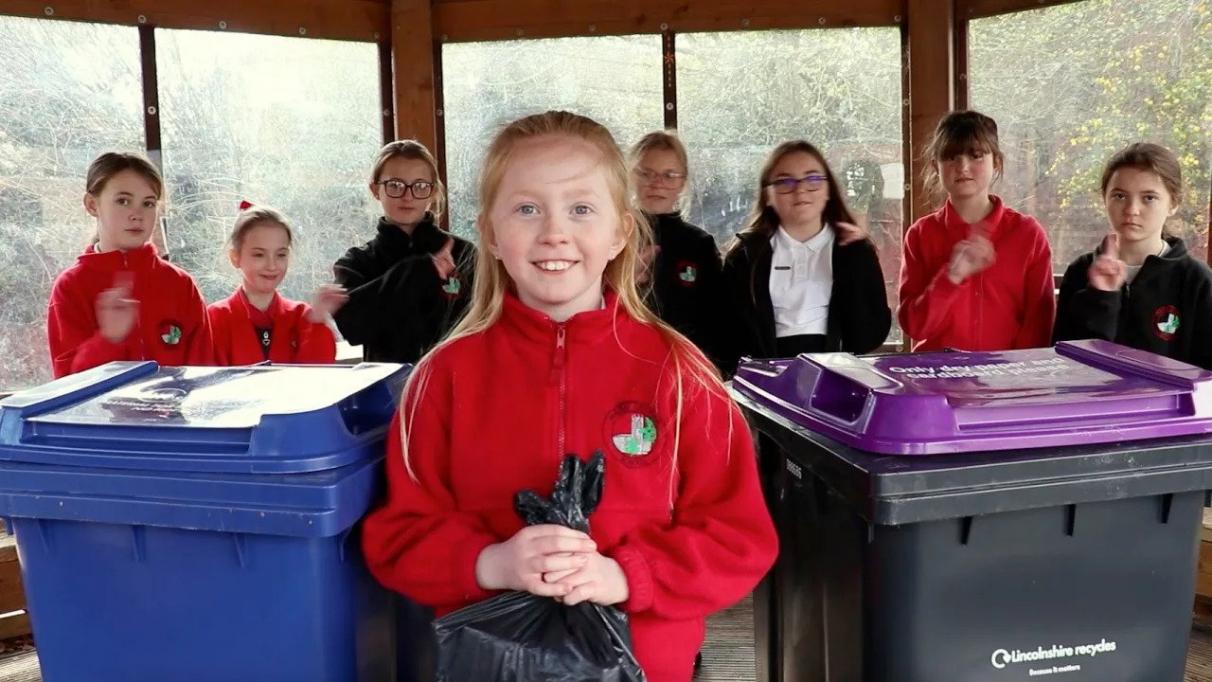 Pupils at Gainsborough Parish Church Primary School want to help you put the right thing in the right bin.

Keen to help people recycle more, eight pupils from the school made a video – with the help of the Lincolnshire Waste Partnership – explaining what goes in each bin, including the new purple-lidded bin.

Pupils Mia, Kyla-Rose, Erica, Darcie, Maisie, Emily, Grace and Evie star in the video, explaining what goes in each bin in West Lindsey.

“It is so important that the younger generation learn the messages around recycling and looking after the planet. Young people have such an important role to play as agents for change to ensure a brighter future.”

“We’re so grateful to the pupils of Gainsborough Parish Church Primary School for starring in the video and helping us spread the ‘right thing, right bin’ message. They’ve shown themselves to be keen young recyclers, and even budding actors and presenters too!”.

We're sorry, this video places cookies in your browser and has been disabled.
To continue using this functionality, please open cookie preferences and accept 'Third Party Cookies'.

Figures show that a staggering 98.5 per cent of all the new bins presented at the kerbside since Monday 18 April were emptied.

The Lincolnshire Waste Partnership has a countywide mission to roll out the new scheme across the whole of Lincolnshire by 2024. So far West Lindsey is the third local authority to roll out a new twin stream recycling collection, following Boston Borough Council and North Kesteven District Council.

Residents are also reminded that no side waste will be taken from any of the waste collections in West Lindsey.

For more information about what goes in each bin in West Lindsey, please visit our Bins, Waste and Recycling page.

Behind the Business: Meet Rebecca from Sinful Skin Aesthetics
Changes to voting at polling stations in West Lindsey from May 2023
Solar panels helping to reduce carbon footprint
END_OF_DOCUMENT_TOKEN_TO_BE_REPLACED