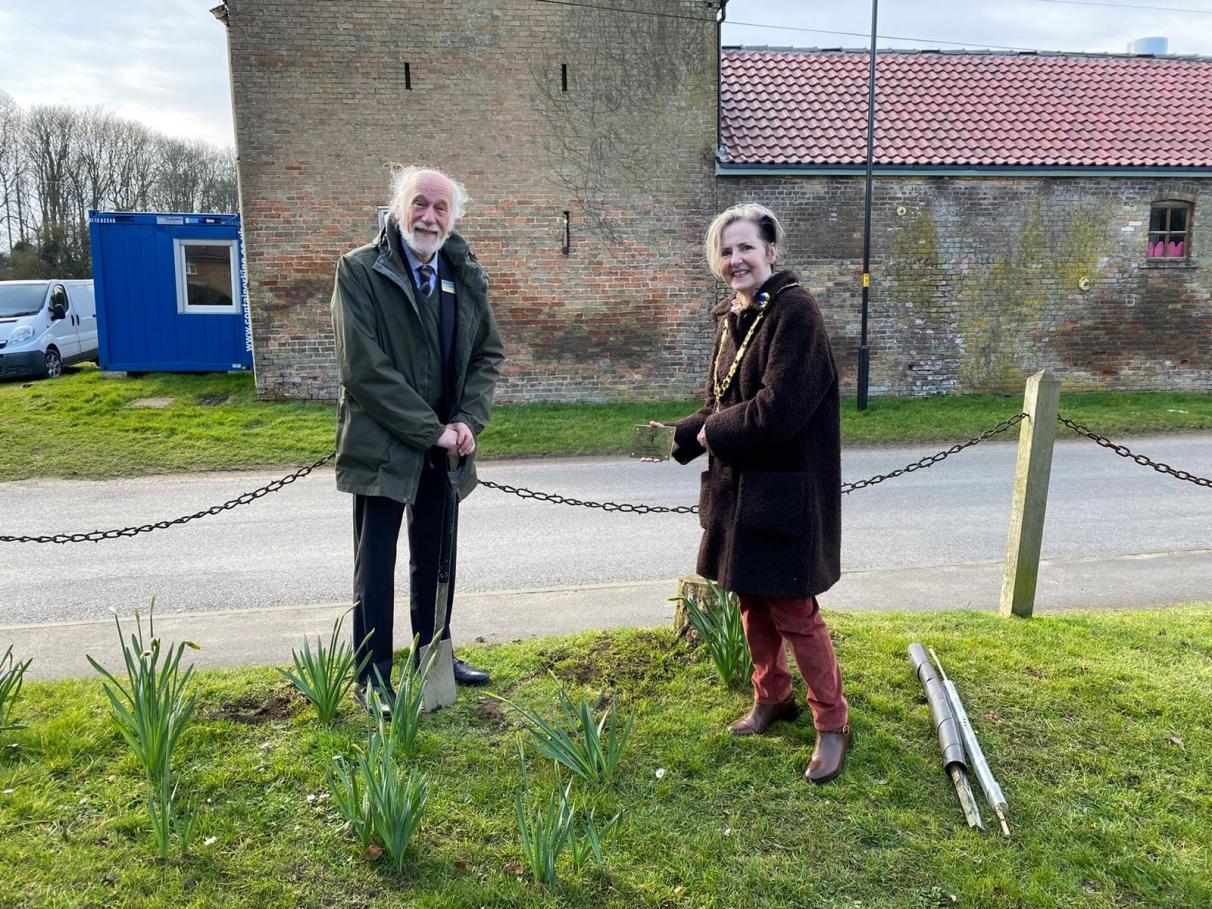 Vice Chair of West Lindsey District Council, Cllr Angela Lawrence and Leader of the Council, Cllr Owen Bierley, have planted a tree in Great Limber, in honour of Her Majesty the Queen.

The pair were present at an official ceremony at Great Limber Village Hall on Friday (11/03), alongside fellow Councillors, residents and the Mayor of Caistor.

The initiative is part of the Queen’s Platinum Jubilee celebrations, involving the planting of trees throughout the entire nation in honour of Her Majesty’s 70-year reign. Councillors in West Lindsey will have the opportunity to plant a tree in a public place in their ward, and have been provided with a plaque to display in honour of the occasion.

This day was chosen as it was the 70th day of the year, in what is the 70th year since the Queen’s ascension in 1952. In partnership with the National Association of Civic Officers, Councils around the country also took part in the day’s event in the hope it would be close to a world record for simultaneous tree planting.

Further tree planting ceremonies are planned throughout West Lindsey, including in Gainsborough, Stow, Saxilby, Scampton, Caistor, Welton, Market Rasen, and Nettleham, and already follow ceremonies that have taken place in Fenton and Torksey, as well as Cherry Willingham.

In total, a further 18 trees are planned to be planted in West Lindsey by West Lindsey councillors leading into the official Jubilee celebrations.

Vice-Chair of West Lindsey District Council, Cllr Angela Lawrence, said: “It is an honour to be able to represent West Lindsey and plant a tree in honour of Her Majesty the Queen’s incredible 70-year reign. West Lindsey residents are planting trees one after the other, and I am thrilled that so many people want to become part of the Queen’s Green Canopy.

“My congratulations go to her Majesty for her incredible achievement and life, and I know many people in West Lindsey will join me in wishing the Queen many, many more years as our reigning monarch.”

Cllr Owen Bierley, Leader of West Lindsey District Council, said: “Today I am delighted to be able to play a small part in our national celebration to honour Her Majesty The Queen and her incredible reign over the past 70-years.

“The idea of planting a tree for the Jubilee is quite ingenious and I am excited that West Lindsey is participating in this environmentally-conscious celebration. The Queen has been a constant source of inspiration and comfort throughout the past 70-years and her leadership is something I am most certainly delighted to honour.”