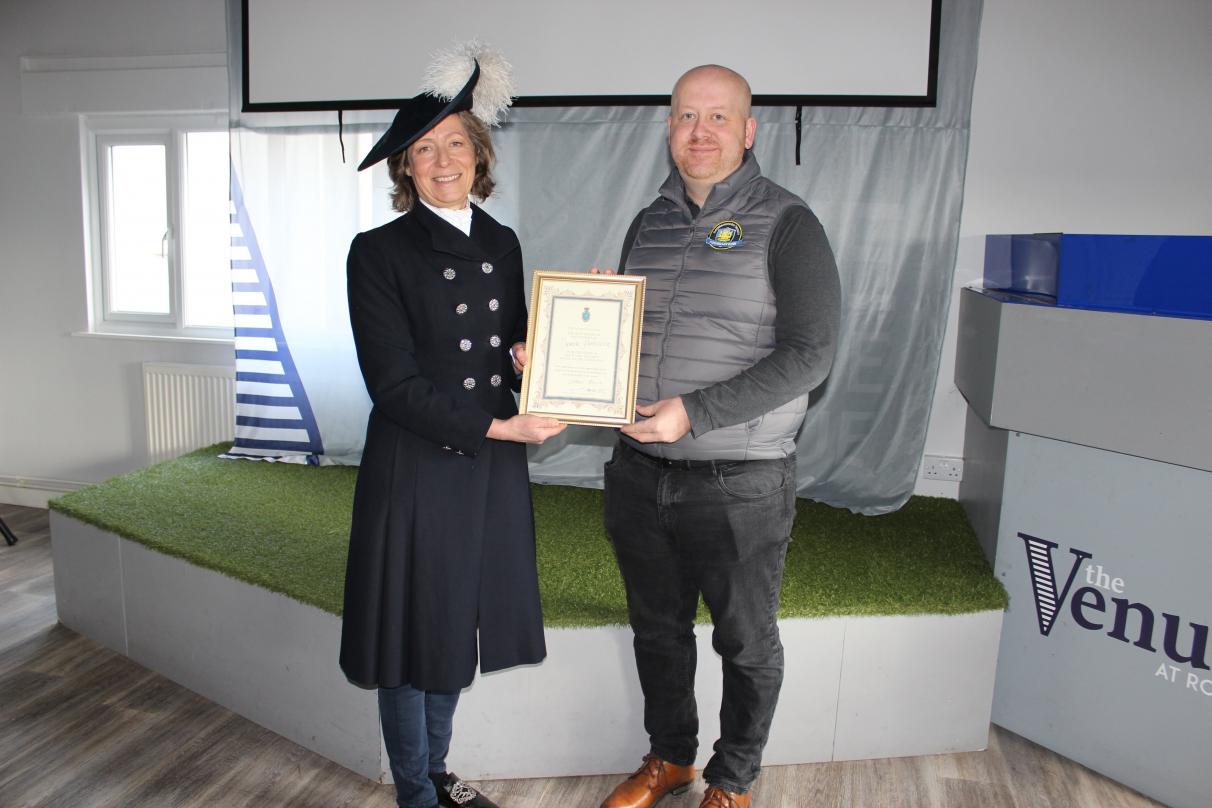 Damon Parkinson was one of four residents who were awarded a High Sheriff Award last week.

Four local residents who provide great and valuable service to their local communities have been awarded a High Sheriff Award.

Those presented with an award include Deborah Clarson, Cat Paton and Jackie Applebee, who were all handed their awards at a special ceremony on Monday morning (14/03), at the X Church Kitchen in Gainsborough. The trio were handed awards for their community work, including with Gainsborough Crisis Action Team and for work to enhance local green space Ashcroft Park.

A further award was handed out at the Venue facility at Roses, Gainsborough, on Thursday (17/03) to Damon Parkinson, for his work with the Gainsborough Trinity Foundation, a foundation set up to improve the lives of people across the county through sport, physical activity and education.

All of the awards were handed out in person by the High Sheriff of Lincolnshire, Claire Birch, who is tasked with finding unsung heroes in our county, recognising them, supporting them, thanking them, and where appropriate, giving out awards where a person has made an exceptional contribution to our community.

"It was a delight to be present on Monday to see such inspirational community-focused individuals receive such a prestigious award. Debbie, Cat and Jackie are tireless individuals, and prime examples of how residents can make a real difference to their communities.

"I am also aware of the work that Damon does in our community and I congratulate and thank him for his constant efforts to improve the lives of all those in our District.

"I want to also thank the High Sheriff for recognising these individuals and honouring their achievements in such a powerful way."

One of the Winners, Jackie Applebee — who was given an award for her efforts to enhance local Gainsborough green space, Ashcroft Park, said:

"I lived in Portland Terrace and realised there was nowhere for people to go and I felt this little area could just do with a facelift. Everybody told me that I was wasting my time!

"Older people love the rhubarb patch that the home schoolers have physically planted. There has been food grown alongside flowers and I really would like to thank Marks & Spencers and Lidl who gave us all their plants and for the support they gave us in doing the park. I would love to see the Children’s play area moved to the middle of the green!

"I’m not very good at this sort of thing - I do lots of bits of community work and I do it because I want to do it, you never expect any recognition for it so it is really quite amazing to have that recognition."

Fellow winner Cat Paton, who works with Deborah in the kitchen at the X Church as part of the Gainsborough Crisis Action Team, and has been doing projects such as this for 11 years, said:

"I’m absolutely delighted to receive the award but I don’t see it as much of a personal recognition, I see it as recognition for the work that we do here at X Church Kitchen to support vulnerable adults living in our community.

"I knew (about this award) but I had to keep it a secret from Debbie, who did not know! We host people here, we offer support groups, we do a variety of social activities but we also do a lot of very low-level stuff, such as keeping a roof over people’s heads, making sure people have gas and electric, making sure they have food – making sure people are mentally well enough to join in on the social aspect. People are incredibly grateful and that’s a nice thing – the feedback we get from people is lovely, and sometimes you see people coming in extremely low and two months later, they are in a much better place. They are socialising, they are doing things, that is a reward in itself."

Speaking after his award ceremony at the Venue, Roses, Damon Parkinson said:

"I’m really proud because it has capped off, us an organisation and me personally, two years which have obviously been really challenging with Covid, opening and closing, all the uncertainty – so I am really proud.

"To me it demonstrates what we have done, and the hours we have put in, have been massively worth it to be recognised and Claire mentioned a number of people have recognised us so I am really proud."