A vibrant spectacle of fire and light drew thousands of people to Gainsborough this weekend. 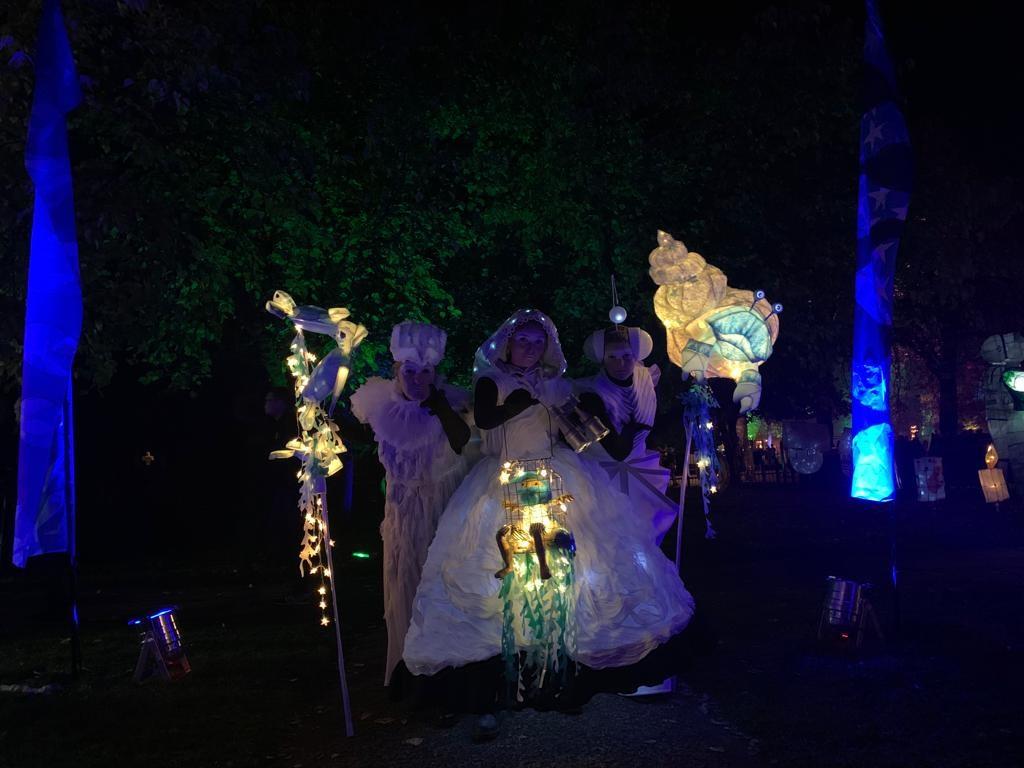 Smiles lit up the faces of people of all ages as they soaked up the atmosphere of this year’s illuminate event to commemorate the 400th anniversary of the Mayflower story.

Fire dancers and musicians welcomed visitors as they strolled through the grounds of All Saints Parish Church, taking in all the colourful elements of the first fire garden display to take place in the town centre.

Those attending could then walk among the Illuminated performers towards Gainsborough Old Hall, where projections of a wonderful film, produced by local production company Electric Egg with the help of Dr Anna Scott, telling the story of the Mayflower, was beamed onto the outside of the historic manor house.

As people clapped the end of each film showing, they then wandered around the grounds of the Old Hall taking pictures with the performers, toasting their own marshmallows over a fire pit, and tucking into some hot food.

People were also frantically texting their friends to encourage them to join which many described as a ‘standout’ event for the town.

Over 2000 people entered the grounds of All Saints Church to see the fire garden – with the overall mood and reaction being that the event was a stand-out occasion for the town.

Lucille Middleton and her husband Cliff attended the event from their home in Morton.

Lucille said: “I think this is absolutely fantastic to see the projection on the Old Hall, then to walk around the church grounds for the fire garden. It was good to see so many people at the event. We have never seen anything like it before and the stilt walkers were outstanding.”

Alan Robinson attended the event with his daughter Lizzie. He said: “It is a really good event to attract tourism. It is so nice to see everyone out together with their families.”

Vikki Wain and her son Ernie (7) toasted marshmallows in the grounds of the Old Hall as they soaked up the atmosphere from the illuminations.

Vikki said: “It is a fantastic event. It is good to have something like this in the town and to see so many people enjoying it.”

Ann Addy, from Gainsborough, praised the team who organised the event. She said: “It has been amazing. Well done to the team, we are so grateful for all the planning that has been put into making this event happen. It really has put Gainsborough on the map.”

Kathleen Parker, also from Gainsborough, was delighted to see crowds of people at the event.

She said: “There was such a buzz and it was so lovely to see so many families about. What we are celebrating is something that happened 400 years ago when a small group of everyday people gave us freedom to choose whether to go to church or not. As a practicing Christian, we hope there will be another new revival here in Gainsborough.”

Holly Popplett attended the event with her husband, Graham and their two daughters Daisy and Scarlett.

Holly said: “It is the first time we have been here and it is really good. The fire garden is amazing.”

Graham added: “It was a really interesting projection and such a lovely way to project it on to the Old Hall.”

Daisy (7) and Scarlett (6) and their friend Theadora Williams-Holden (6) all made lanterns at school, specifically for the event.

Describing how she made her lantern, Daisy said: “We cut out squares of tissue paper then put a pic around it, added gems and stars and put a candle inside. It was great.”

Her sister Scarlett added: “It has been fun – the fire garden has been really good.”

Theadora added: “I have enjoyed coming to the event with my friends and liked the toasted marshmallows and the fire garden.”

Claire Shaw attended the event with her two children and her husband.

She said: “It looks so good. We started attended the illuminate events a few years ago and took part in the lantern parade. We made new lanterns for the event this year.”

Her daughter Willow (7) added: “I think the event is really good. It didn’t take long to make our lanterns but I wanted to make my own lantern to bring tonight.”

Darcie Boles (7) also attended the event with her family. She said: “It was really good. I liked the fire garden and the people who were all dressed up as boats, they came to our school as well.”

Kirsty Champ has been working in schools to help create lanterns for the events for a number of years, including this year.

She said: “It is joyous when you here small children excited by the spectacle not to mention the adults reactions. When children are in awe when you switch the lights on some of the things you have made it makes me so happy. I love the vision of this event and it far exceeded a lot of people’s expectations. People were blown away by it all. I have worked as a freelancer working with Dr Anna Scott for a number of years and she is ace – I can’t speak highly enough about her.”

This year’s Illuminate was the culmination of work developed over the last five years, following the creation of new partnerships and funding awards. West Lindsey District Council’s cultural programme of events and activities has been made possible thanks to a £100,000 grant from Arts Council England and support from a wide range of partners including Gainsborough Town Council and Lincolnshire County Council.

The event, a culmination of years of planning and workshops with schools and the community, was a great way to commemorate a huge part of the town’s history and heritage and West Lindsey District Council would like to thank everyone who supported this project.