400th anniversary of the Mayflower marked – as families attend from West Lindsey and beyond! 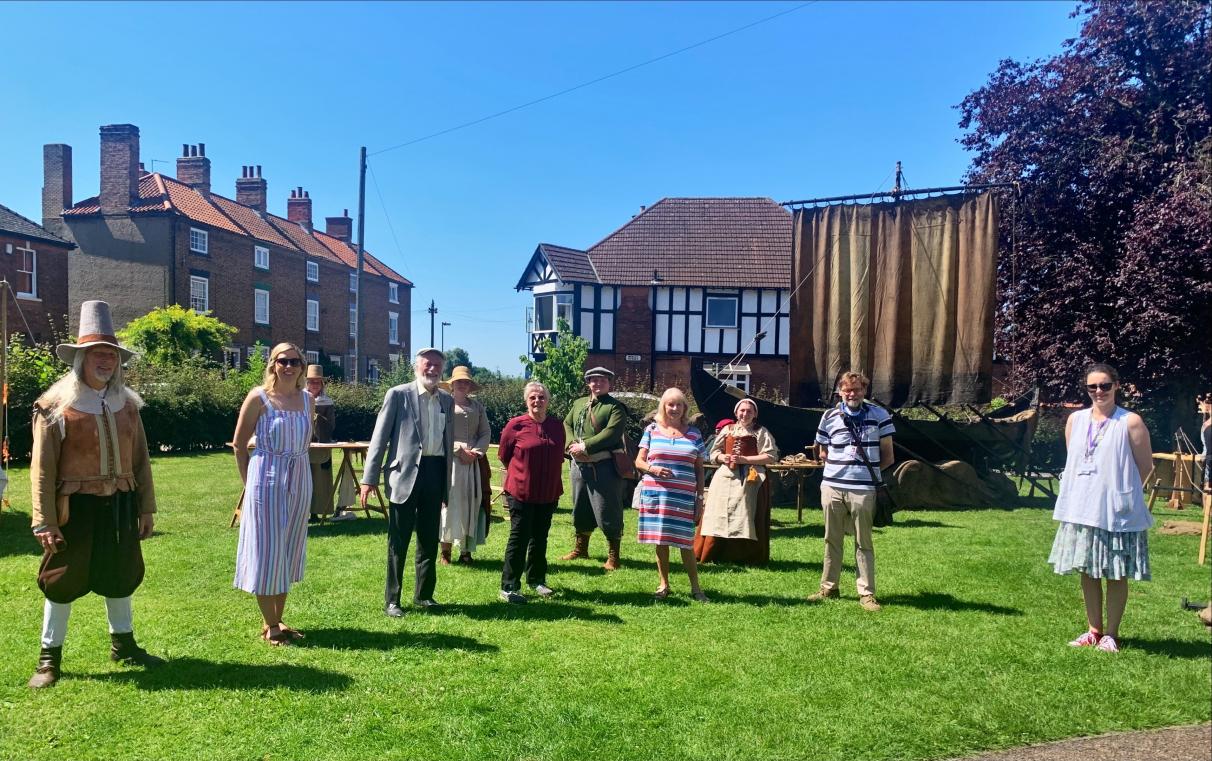 Families across West Lindsey and beyond were present to enjoy a sun-soaked day of festivities at Gainsborough Old Hall on Saturday – as the 400th anniversary of the Mayflower story was officially marked in the town.

Having been postponed last year as a result of the pandemic, the event – “Flight of the Separatists,” marked 400-years of the story of the Pilgrims’ escape from England in search of religious freedom via Gainsborough.

The event – the first in the recently re-opened Gainsborough Old Hall – included performances from theatre group Rhubarb Theatre, as well as activities such as felt hat making, pottery making and rope making, on what was a beautifully blue-skied occasion.

Cllr Owen Bierley, Leader of West Lindsey District Council, attended the event and thoroughly enjoyed the day, as well as a tour of Gainsborough Old Hall.

He said: “I enjoyed the day immensely, perhaps most especially the tour of the building when I also learned a great deal.  Although I've been before it was interesting to see the changes English Heritage have made and their interpretation of the Old Hall and its history was amazing.  It is one of the finest medieval homes in the country and what can be seen today fully reflects how well it has been loved, cared for and adapted by so many generations of owners.  As such it is of interest to people of all ages indeed to the whole family. English Heritage also have exciting plans to increase the appeal and usage of the Old Hall and I would highly recommend a visit.”

She added: “Gainsborough Old Hall architecturally reflects over five hundred years of history and it is easy to image the residents dinning in the Great Hall on Oxen cooked in what is possibly the most complete medieval kitchen in England.

“I was also impressed with the interactive multimedia guide which is informative for adults and children alike. It is probably one of the best-preserved medieval manor houses in England and I cannot wait to climb the 59 steps to the top of the tower for views across Lincolnshire.”

Praise for the Old Hall was shared further by Cllrs Judy Rainsforth and Stephen Bunney, who were delighted to be able to attend and support the event.

Cllr Steven Bunney said: “It is interesting to see the various crafts taking place and it is great to be able to see and support these things in our area. I was looking forward to looking around the Old Hall - it really is a treasure of the district.”

Cllr Judy Rainsforth added: “I have had a brilliant day and the weather has been fantastic. I moved here 30-years-ago and I have never seen the Old Hall look as fantastic as it does now.”

Families across West Lindsey – and from as far as Lincoln and Derbyshire – took part in the activities and festivities on-offer, with many praising the performers and activities taking place.

Noah Hamilton (7) attended the event with his Mum and Dad, as well as his grandparents.

He said: “It is exciting. I have made a green man out of clay and it was messy but fun. I was also telling jokes to the jester.”

His Nannie Janice Douglas added: “It has been absolutely brilliant. We have all really enjoyed it. The Jester has been amazing and has been so funny.”

Marie Williams (77) of Gainsborough, described the event as ‘amazing’.

She added: “Having the event in the grounds of Gainsborough Old Hall, really brings the place alive.  I have loved sitting in the garden with a cup of tea watching everything. It has been a really interesting day and the Pottery man is so clever – he has made the most perfect pots.”

Simon Petts and his daughters enjoyed watching the Rhubarb Theatre show on the Lawn outside the Old Hall.

He said: “The Theatre show was really good and so was the band. We loved the big ship and seeing everyone dressed up. It is great that we have been able to have an event like this on our own doorstep.”

Violet Vamplew (8) from Lincoln attended the event with her mum and they had a try at the Catch-a-Hare game.

She said: “It is good. In the old days they didn’t have a TV and they had to play games like this. I have been looking forward to watching the theatre show.”

Her Mum Louise added: “I love the event especially the ship - it is very impressive. We travelled from Lincoln instead of going to the seaside today and I am pleased that we did.”

Margaret and Roy Harvey travelled all the way from Derbyshire to visit the Old Hall and loved taking in the event as part of their tour.

Margaret said: “We are both members of English Heritage and we came to see the Old Hall. It was lovely and I will be back in a few weeks with my friends.

“We have loved watching the pottery man, the lady making the hats and I feel we have learned a lot. I didn’t realise Gainsborough as so involved in the Pilgrim story and so it has been very interesting.”

Roy added: “The event has really added to the character of the place and it gives an insight into what life would have been like back then.”

As well as those attending, the delight was shared amongst visitors both associated with the Old Hall, and those running stalls as part of the occasion.

Joy Woods (80) has been looking after the gardens at the Old Hall for 25 years. She attended the event with her husband Richard and their friends.

She said: “The event looks really good I have enjoyed watching the lady making the hats and it is lovely to see how they were made.”

Susan Scott (70) used to be the Principle Keeper at the Old Hall. She said: “I am really pleased to see the Old Hall open again as it is gorgeous. I love everything so far with the tradesmen - it really brings the place alive.”

Myle Piper was running the games stall at the event on the day.

He said: “It is the first time I have been to Gainsborough Old Hall and it is very impressive. It has been interesting listening to people and what they have to say. We haven’t changed much in all these years – we are still the same people and we still need to have fun in our lives to carry on.”

Peg Skinner was also running a stall on the day – this time demonstrating hat-making.

She said: “I was here about 12 years ago but it is so lovely to be back as the Old Hall is beautifully preserved. People have been genuinely amazed to see how we make hats and have enjoyed learning something new and have been very appreciative.”

Russ Scott said it was the first time he had been to the Old Hall; he spoke to us from his position next to his boat in the Old Hall gardens!

He said: “This is a fantastic place and the event has been very well organised and we could not have asked for better. There has been a lot of interested in the boat. Little Jolly Boats like this will have been used in the days when the river was used more. When there was markets up and down the stream – these would have been the main port of transport. The boats are also connected with the separatists and growing up in Gainsborough people would have seen many of these around.”