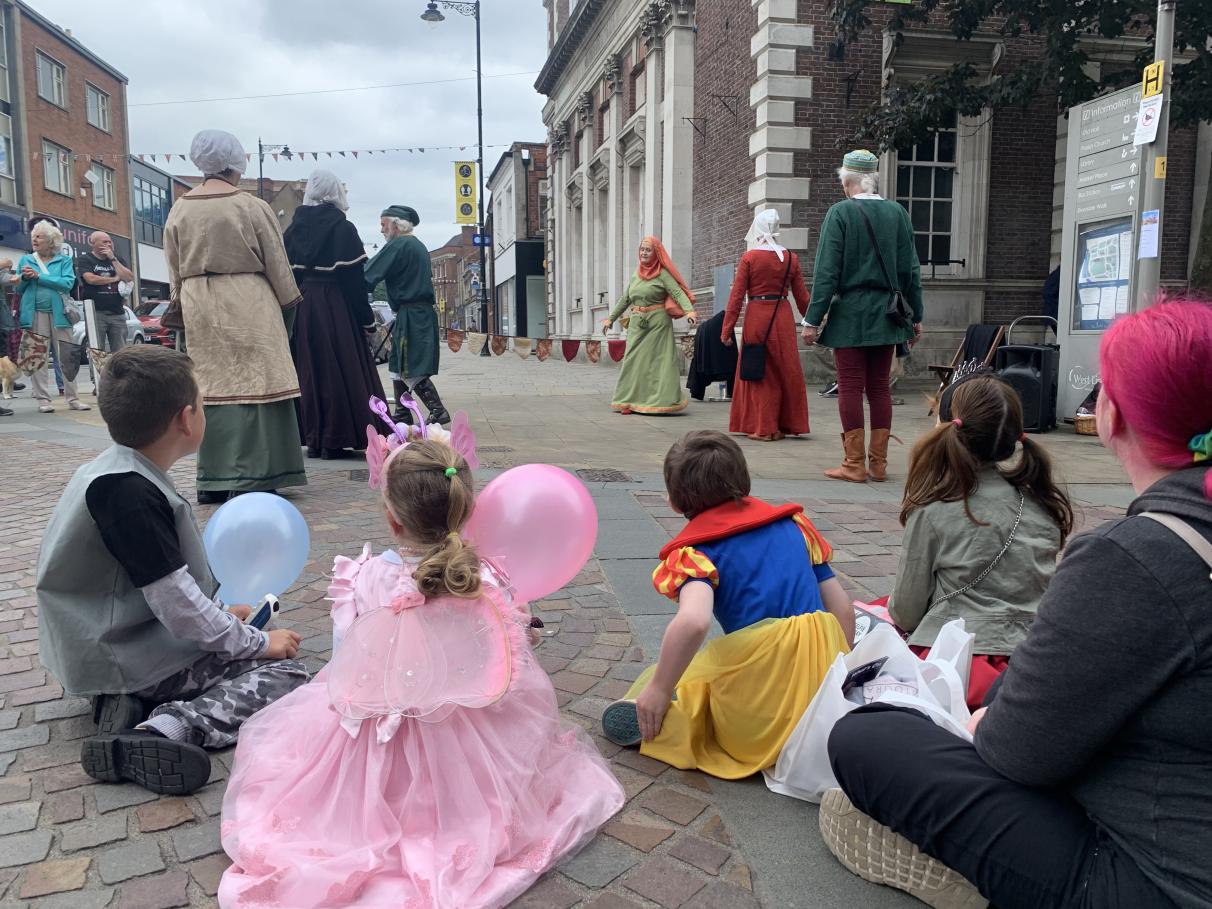 Families, locals, tourists, dancers and even a police officer from the 1850s were just some of the attendees at the Merrye Olde Market on Saturday.

Chairman of the Council, Cllr Steve England, attended the event and was delighted to meet so many people.

He said: “It was a true delight to see so many people out exploring all the stalls and engaging with all the entertainers, stall-holders and organisers of today’s event.

“Though it wasn’t the sunny summer’s day we had all hoped for, it certainly didn’t affect the turn-out and I thoroughly enjoyed my day watching medieval dancing, learning about Gainsborough and crowning James and Aros Pringle as the winners of the Historic Hat competition!”

Organiser of the event and Townscape Heritage Initiative Activity Co-ordinator Theresa Workman, said that she was delighted with the turn-out and participation from locals.

She said: “Despite the weather we met plenty of enthusiastic families and locals, all keen to learn more about their town and witness the historic entertainment on offer.

“It was great to meet so many people and I want to thank everybody involved in helping to organise a fun but ultimately safe celebration of the town.”

Many of the stall-hosts were thrilled to be engaging with the local community again.

Andrew Birkitt, chairman of the Gainsborough Heritage Centre said a lot of their products had been sold and they had to quickly restock with more on the day.

He said: “It has been brilliant, really busy and people have had lots of questions. We were quite surprised that people didn’t know we had a heritage centre or where it was. We can’t wait for this to happen again – even if it is only a couple of times a year it would be great.”

Medieval dance group Grantham Danserye, who took part in a series of performances to crowds on Lord Street, enjoyed engaging and performing to the local community.

Lynne Spicer, dancer, said: “It has been wonderful, we have really enjoyed it. The event has been well organised and we are pleased to support it.”

Paul Eady, also a dancer with the group, added: “It has been lovely – we have performed in the town before at Gainsborough Old Hall.”

Volunteer Chairman of the Old Nick Theatre, Des Kirkland, was dressed up as a Victorian Police Sergeant from the 1850s, and was experiencing his first outdoor event since March 2020.

Stood alongside his stall, he said: “The people are certainly taking the market very well, there is are lots of interesting stalls and people are asking lots of questions and that’s really good, especially now we are coming out of the Covid situation – hopefully. People want to get out, they want to explore and they want to be entertained and as a theatre we are hopefully part of that experience!”

Chris said: “It gave us something different to do and it has been educational for the children to learn about the area.”

Jess added: “It is nice for families, everyone has been so friendly and approachable and it helps to get children interested in their local area.”

With medieval dancing, music, lots of tasty food, and historic costumed characters dotted throughout Lord Street, it was obvious why so many younger visitors had only positive things to say about the market.

Nine-year-old Layla Paige said: “I have had a lovely day at the market, seeing everyone dressed up. I love all the lovely people in Gainsborough.”

Seven-year-old Sam Mumby - visiting the event with his dad Mike from Saxilby – said: “I have enjoyed writing on the graffiti wall. I have enjoyed today. I love history and nature and I really like Steve Backshall.”

Ten-year-old Sophia Newman even dressed up for the event. She said: “It has been really good. I loved seeing everyone dressed up and having fun.”

Nine-year-old Rhys Dobbie added: “It has been brilliant.”

The winners of the Historic Hat competition were crowned by Chairman Steven England and Chief Executive Ian Knowles – with brothers James and Aros Pringle crowned as the winners.

Five-year-old James and two-year-old Aros attended the event with their parents Iain and Emily, and travelled from their home in Ingham.

Aros added: “My daddy helped me make the hat.”

Mum Emily said: “It has been a really good day. We have really enjoyed it as I am a history teacher and Ian is an archaeologist.”

The day marked the beginning of the £1.25m Townscape Heritage Initiative project – funded by the Heritage Lottery Fund – to restore and improve the historic buildings in Gainsborough Town Centre, with Lord Street selected as one of the streets being used as part of the project.