"Bump" Up Your Support for Road Safety 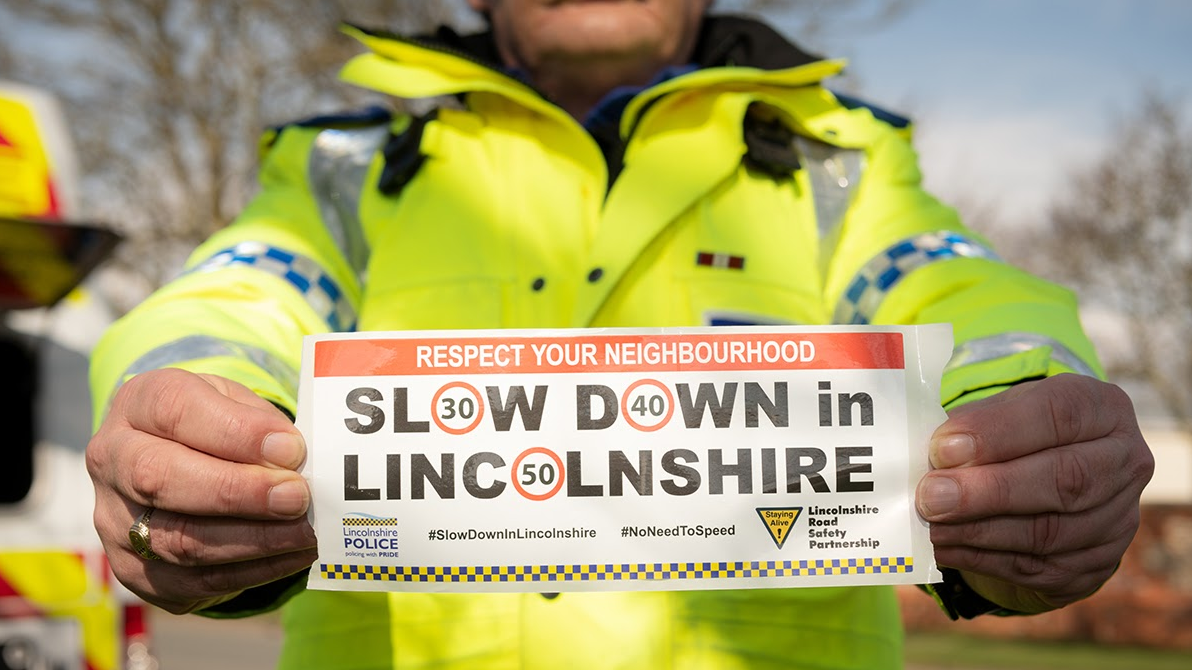 Drivers are being asked to “bump” up their commitment to safer driving by displaying a #SlowDownInLincolnshire bumper sticker on their vehicle as part of a new road safety campaign by Lincolnshire Police.

The new campaign will see motorists display a bumper sticker to the rear of their vehicle or rear windscreen which calls for road users to respect their neighbourhood by observing the correct speed limit. The pledge to drive safely aims to instil community pride and ownership of the safety of their roads.

The stickers can be collected from stations* across the county and displayed either on the rear bumper or windscreen of a car, van, farming machinery, motorcycle, or other larger fleet vehicles, and will also be handed out by local Neighbourhood Policing Teams.

The initiative was thought up by PCSO Dave Bunker following concerns about speeding from the local community in Skegness. He researched alternative ways of engaging drivers in road safety campaigns, and found a similar initiative in the USA.

PCSO Bunker, said: “With the help of local drivers and businesses who commit to drive within the speed limit – or lower if the road conditions dictate – speeding could become as socially unacceptable as drink driving or not wearing your seat belt.

“Let’s do this together. If average speeds fell by 1% the number of crashes on our roads would fall by 5%. Every community across Lincolnshire will know the impact speeding can have on safety, from navigating our many rural roads where blind bends or poor overtaking can mean speeding poses even more of a risk, to keeping the streets where our children go to school or play safe.

“Tackling speeding is an important priority for the residents and people working in my neighbourhood and the rest of Lincolnshire, which is why as a Force we are rolling this out county-wide. Every driver can contribute and #SlowDownInLincolnshire.

“This bumper sticker campaign is an innovative way of involving the local community in promoting the road safety message on their roads; we would like our communities to feel empowered to pass on the message to ‘slow down in Lincolnshire’ and work with us to make our roads safer for all.”

John Siddle, Lincolnshire Road Safety Partnership, added: “We know around 25% of injury collisions have speed as a contributory factor and all collisions are exacerbated by speed. In previous enforcement campaigns we have seen drivers, local to their own community, exceeding the speed limit. What we say to drivers is to slow down in your community as well as other communities where people just like your want a safe place for their families.

"Despite three lockdowns in the last year we have still seen families torn apart by death on our roads, and although the overall number of injury collisions has fallen, the fatalities remained similar to previous years. We ask all drivers to 'slow down in Lincolnshire', and be that driver who keeps others, and themselves, safe.”

People are also asked to support by sharing social media posts, using #SlowDownInLincolnshire and #drivesafelincs. Drivers are encouraged to take a photo of their vehicle displaying the sticker and tag in their local policing team to help promote the project.

This new community project is the first push of a year-long road safety campaign launched by Lincolnshire Police under the banner of #drivesafelincs.

Behind the Business: Meet Rebecca from Sinful Skin Aesthetics
Changes to voting at polling stations in West Lindsey from May 2023
Solar panels helping to reduce carbon footprint
END_OF_DOCUMENT_TOKEN_TO_BE_REPLACED